A Detailed Look of the Imola Grand Prix 2021

Ciao ragazzi and welcome to the Formula 1 Pirelli Gran Premio del Made in Italy e dell’Emilia Romagna in the Autodromo Internazionale Enzo e Dino Ferrari in Imola, Italy! If last year’s Italian races were entertaining, this season’s first Italian race did not disappoint. A day that started with uncertainty definitely made for a chaotic, heart-racing, and nerve-wracking race.

The weekend kicked off with Hamilton dominating all three practice sessions; Mercedes enjoyed a one-two in FP2. McLaren’s Lando Norris made exceptional runs, getting purple in Sectors 1 & 2 in multiple practice laps, making him a front-row favourite for qualifying.

This weekend’s qualifying was a most special one as Lewis Hamilton would take pole position, making it an impressive 99th pole in his entire F1 career. It was also the first time that Williams had both cars in Q2 since the 2018 Italian Grand Prix in Monza and the first time in his career that Red Bull’s Sergio Perez would have a front-row start taking P2 right next to Lewis Hamilton. Although it was one qualifying, Norris would want to forget as he had a 3rd place position on the grid snatched away after his lap time got deleted due to exceeding track limits exiting Piratella. Yuki Tsunoda was unable to even set a qualifying lap. He suffered a massive shunt after an ambitious take at the Variante Alta chicane, losing control of the car and hitting the barrier at high speed. Upon a final check-up of his car, Alpha Tauri decided to give him a new power unit and gearbox. Had he set a qualifying lap and gained positions, he would’ve had to serve a 5-grid penalty for changing his PU.

For early parts of the weekend, the drivers and the teams were greeted with sunshine and chilly weather, giving them different data that would later contribute to their strategies… that was until the actual race day came. They were greeted with dark clouds and impending rain. Unfortunately for the drivers and their teams, rain would not fall until 15 minutes before lights out. Even then, during the formation lap, drivers reported back to their engineers that some parts of the track were aquaplaning while other parts were completely bone dry. This caused a lot of uncertainty for the teams as their strategies had to shift dramatically as the track situation changed by the minute.

Drama already ensued as, during the formation lap, Lance Stroll’s Aston Martin would catch fire as his rear brakes overheated and caught fire, melting bits of the components involved. Sebastian Vettel’s car also showed similar problems, causing the mechanics to try and fix both cars with the limited amount of time they had left. As a result, Stroll’s car was fixed with a minute to spare while Vettel would be starting the race from the pit exit. Track conditions were getting worse when the Ferrari of Charles Leclerc spun off into Acque Minerali. Fernando Alonso’s Alpine slipped and went off track, hitting the wall and incurring front wing damage. Bottas’ weekend got presumably the worst it could get, or so we thought when he suffered a puncture on his rear-left tyre.

After Bahrain’s hints at a hard fought battle, Imola showed just how heated the fight between Red Bull and Mercedes was about to be, with McLaren and Ferrari hot on their heels.

Lights out and away, we went as the championship rivals, Hamilton and Verstappen, battled it out for the race lead, with Verstappen seizing the race lead when Hamilton incurred damage at the Tamburello chicane, with Perez hot on his wheels. The race continued to be full of chaos as Nicholas Latifi’s Williams spun off-track, squeezing Nikita Mazepin’s Haas and eventually making contact with Latifi hitting the wall, ending his race, and bringing out the safety car. While trying to warm up his tyres, Mick Schumacher hit the wall, causing him to lose his front wing right when the pit lane entry closed, forcing him to drive two laps without a front wing until the pit entry re-opened and he was able to box and receive a new front wing, all under the safety car.

Further on into the race, Perez was given a 10-second time penalty for overtaking while the safety car was deployed. Over at McLaren, Daniel Ricciardo received a team order to let his teammate through as Norris had more pace and was at a considerable advantage. This proved to be the right call as Norris immediately started pulling out great laps. Vettel was given a 10-second stop-go penalty as the mechanics failed to put his tyres on 5 minutes before the formation lap, as required by the FIA, dropping him to P17 and a lap behind. Hamilton went off-track, and upon attempting to recover and rejoin from the run-off area, he hit the wall and incurred front wing damage, causing him to lose a few places. 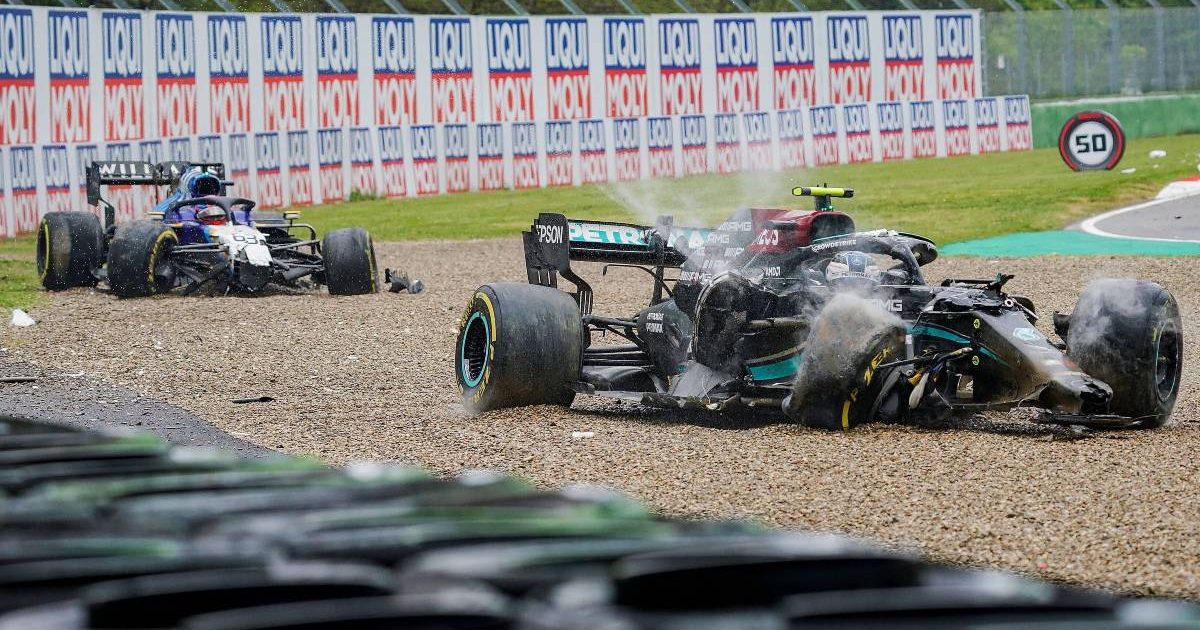 The focus immediately shifted to Russell and Bottas when they came into contact. Russell was attempting to overtake Bottas for P9, and they crashed into each other at the exit off Turn 1. The race was then red-flagged, and all the cars were called to the pit lane as they waited for the debris to be cleared. Right behind the crash were Kimi Raikkonen and Mick Schumacher, who had to drive through all the debris flying around them. After the track marshals cleaned the track of all debris, the race resumed with a rolling start. Verstappen had a quick getaway, letting him keep his lead as Norris overtook Leclerc getting him up into second place. Norris’ second place was short-lived as Hamilton breezed his way from P8 all the way to P2; however, Norris put up a good fight, defending his position for a few laps, pushing Hamilton to work harder for the overtake.

Verstappen saw himself on the top step of the podium, accompanied by Hamilton in P2 and Norris in P3. For a Grand Prix with such a ridiculously long name, at a track with a long name as well, that was one long race. This win let Verstappen close in on Hamilton for the driver’s championship with only 3 points separating them now, making this season’s championship a rather interesting one. This season, we could either see Lewis Hamilton winning his 8th world championship, breaking Michael Schumacher’s record of seven titles, or Max Verstappen’s first-ever world title in his F1 career. 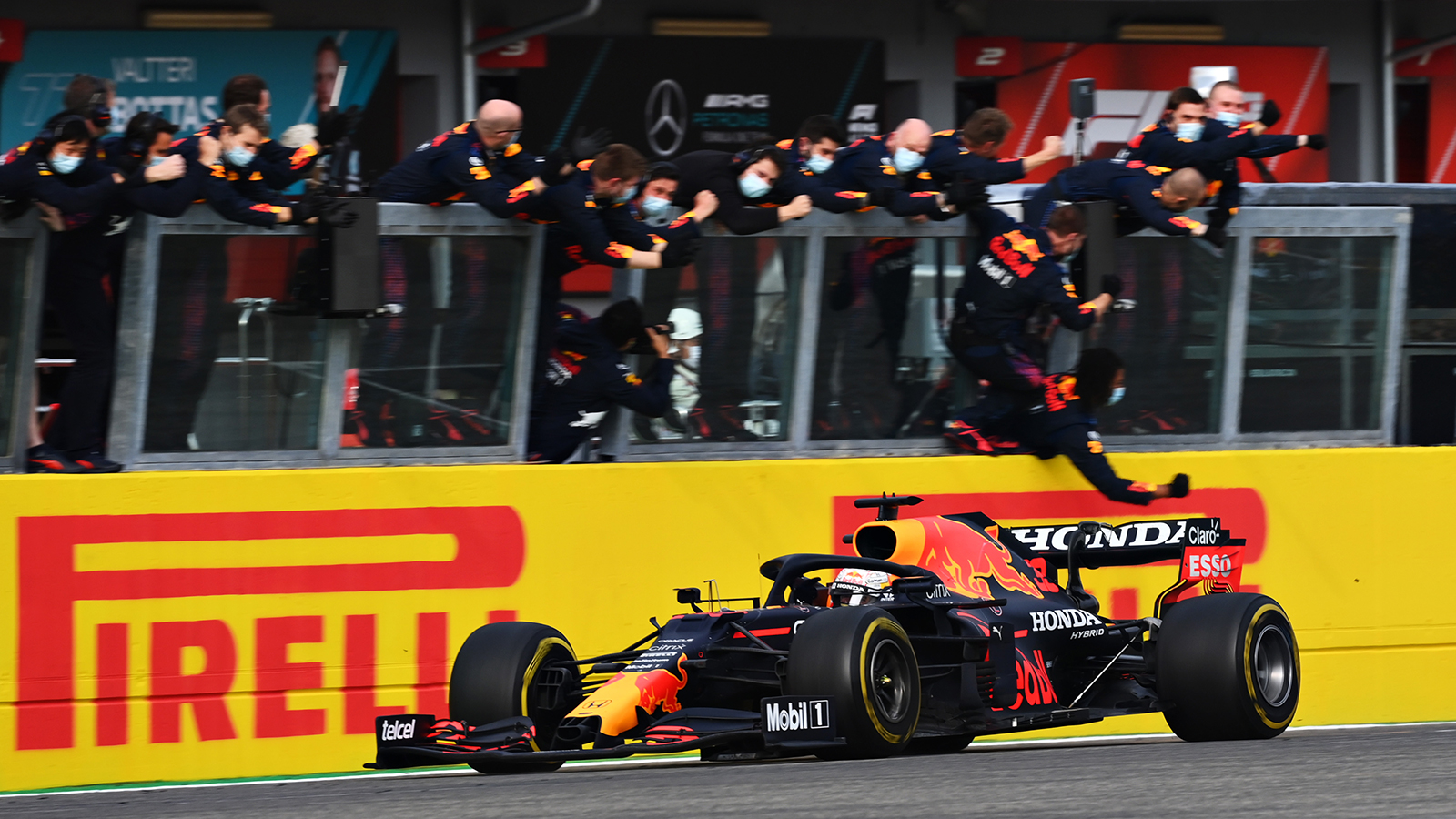 After the race, the stewards handed out some more penalties. The first of which was given to Raikkonen a post-race 30-second penalty for breaching the regulations of failing to enter the pitlane after the safety car restart when he spun his Alfa Romeo at Tamburello. Raikkonen was entitled to regain his position during the safety car, but since he could not do so, he was required to enter the pitlane and then rejoin once all cars have passed. He failed to do so, which meant he was in breach of regulations. This caused him to drop from P9 to P13, allowing Ocon and Alonso to finish P9 and P10, respectively. Stroll also incurred a five-second penalty for gaining an advantage after he overtook Pierre Gasly off the track.

Final Thoughts from the Author:

At first, I was slightly skeptical at the thought of coming back to Imola since I personally thought last year’s race was somewhat dull, but this definitely was worth watching as it had me at the edge of my seat and just buzzing with anticipation with what the next turn and chicane was going to bring. It was a complete rollercoaster of emotions. My heart rate was at an all-time high for a race so early on in the season! I was thrilled to see Lando back on the podium as this entire weekend; he was just in his best form. Seeing him set all those purple sectors and seeing his name on the top of the time column just made me very hopeful, and it was all rewarded very nicely. This was definitely a race to remember, and this just set my expectations for the next 21 races to come.

I am Nicole Urot, 20 years old and in my final year of university, taking up nursing. I have been a Formula 1 fan since I was 10. My favourite team is McLaren and my favourite drivers are Lando Norris, Pierre Gasly and Mick Schumacher. I hope to work in motorsport as an emergency medic on track or as a team medic of sorts. In my spare time, I love to dance and play the guitar and piano. My passion for F1 came from my dad who volunteers as a marshal in some races and the next thing I knew, I was sucked into the world of adrenaline roaring engines and high-speed battles at 300km/h. This is my first article about Formula 1 and definitely not my last!

Championship Countdown: Where Do The IndyCar Odds Lie

As the IndyCar season winds down, ATRL's Eline Luna looks at who will hoist the Astor Cup once the checkered flag falls at Laguna Seca.How it stands With only a single race to go, Will Power leads the IndyCar championship by 20 points. To some people this might seem...