A Detailed Look at the Monaco E-Prix

With the Formula E season nearly half over already, we visited the historic track of Monaco this last weekend. Here’s your breakdown of the historic Monaco E-Prix.

Round 7 of the Formula E World Championship returns to Monaco after two years now utilizing the complete circuit for the full Monaco experience. Drivers who have been to this track before might have a slight advantage over others, but it all comes down to how good they are in practice, qualifying, and the race.

Practice 1 started with a full course yellow flag to test the systems, but it only delayed the session 10 minutes. Throughout this first session, drivers were generally finding their footing, but with 23 minutes left, Sette Camara came to a stop at the la Rascasse, which brought out a red flag stopping the session. After Sette Camara’s car lost power and stopped on the track, Norman Nato went straight into the back of Sette Camara but was able to recover and continue running. Practice got underway again with just under 13 minutes to go. The top 3 at the end of practice were Bird, Evans, and Frijns. 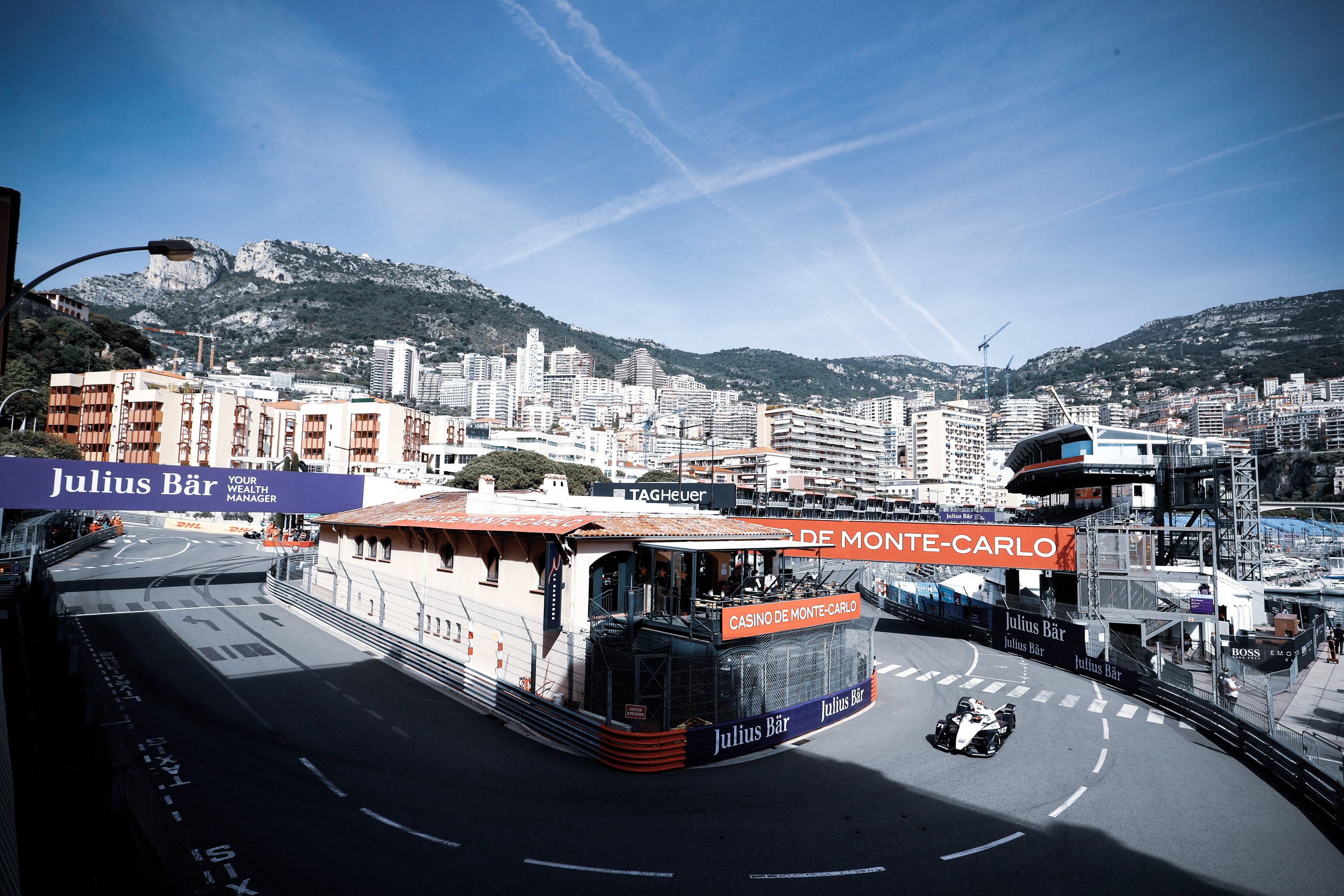 Practice 2 was 15 minutes shorter than Practice 1, so everyone was eager to get out on track. After 6 minutes, everyone had set times, with Gunther and Vandoorne going fastest. Unlike practice one, this session saw no incidents and the whole grid was setting consistent fast laps. The top 3 after this session were: Evans, Bird, and Da Costa.

Qualifying was full of action until the end. Group 1 started the qualifying session, with Vandoorne going out first. Robin Frijns ended up the victor of group 1 moving onto super pole after setting the quickest time. For group 2, Jean-Eric Vergne was the quickest and moved onto the super pole shootout as well. Da Costa and Sims were the first two drivers out for group 3, which worked out well for Da Costa, who was quickest in the session. Group 4’s qualifying session brought drama as Sette Camara crashed into the last corner of the circuit, causing the second red flag of the day.

Consequently, Buemi and Blomqvist were allowed to go out again as they didn’t set a time before the red flag. Maximilian Gunther came out on top in group 4.  The drivers that got through to super pole were: Frijns, Evans, Gunther, Da Costa, Vergne, and Rowland. Rowland had his lap time deleted for an infringement, and Da Costa ended up taking pole position with Frijns in second. Evans and Vergne would be starting on the second row, making a solid starting grid going into the race.

As the race was growing more intense four drivers, Gunther, Cassidy, Lynn, and Rast, all nearly collided together coming out of attack mode.

Once the race in Monaco was off we saw a few incidents around Mirabeau and Alexander Sims retired after the first lap when he suffered damage to the floor of his car. Nyck De Vries had a stop-and-go penalty for an incident during qualifying and took it in the second lap of the race. The battle at the front was heating up as Frijns overtook Da Costa for the lead. Jake Dennis received a drive-through penalty for causing some debris to get on the racing line, which heavily affected his race. As the race was growing more intense four drivers, Gunther, Cassidy, Lynn, and Rast, all nearly collided together coming out of attack mode. Back at the front Evans overtook Vergne for 3rd putting him in podium contention. Da Costa was leading the race again until Frijns overtook him to once again be leading in Monaco.

With 22 minutes to go, everyone has used at least one attack mode except both Mercedes drivers, who had been struggling all day. Da Costa and Frijns battle continued strong with 15 minutes to go, but the safety car was deployed because Rene Rast hit the wall and couldn’t continue. The safety car was finally lifted with 6 minutes and 30 seconds left of the race, but problems continued for many drivers like Vandoorne and Wehrlein who both were forced to retire after they collided at Mirabeau. Mercedes did not have a great day as De Vries also retired suffering complications through the tunnel. The top five battle continued until the final lap of the race where, after the yellow flag for De Vries was lifted, Antonio Felix Da Costa took the lead once more, winning the Monaco E-Prix. Robin Frijns and Mitch Evans finished on the podium with him to round out the first, of hopefully many, full Monaco E-Prixs. With that second place, Frijns took the lead of the championship, followed by De Vries, Evans, Da Costa, Bird, and Vandoorne. Mercedes still lead the constructors by 2 points to Jaguar. 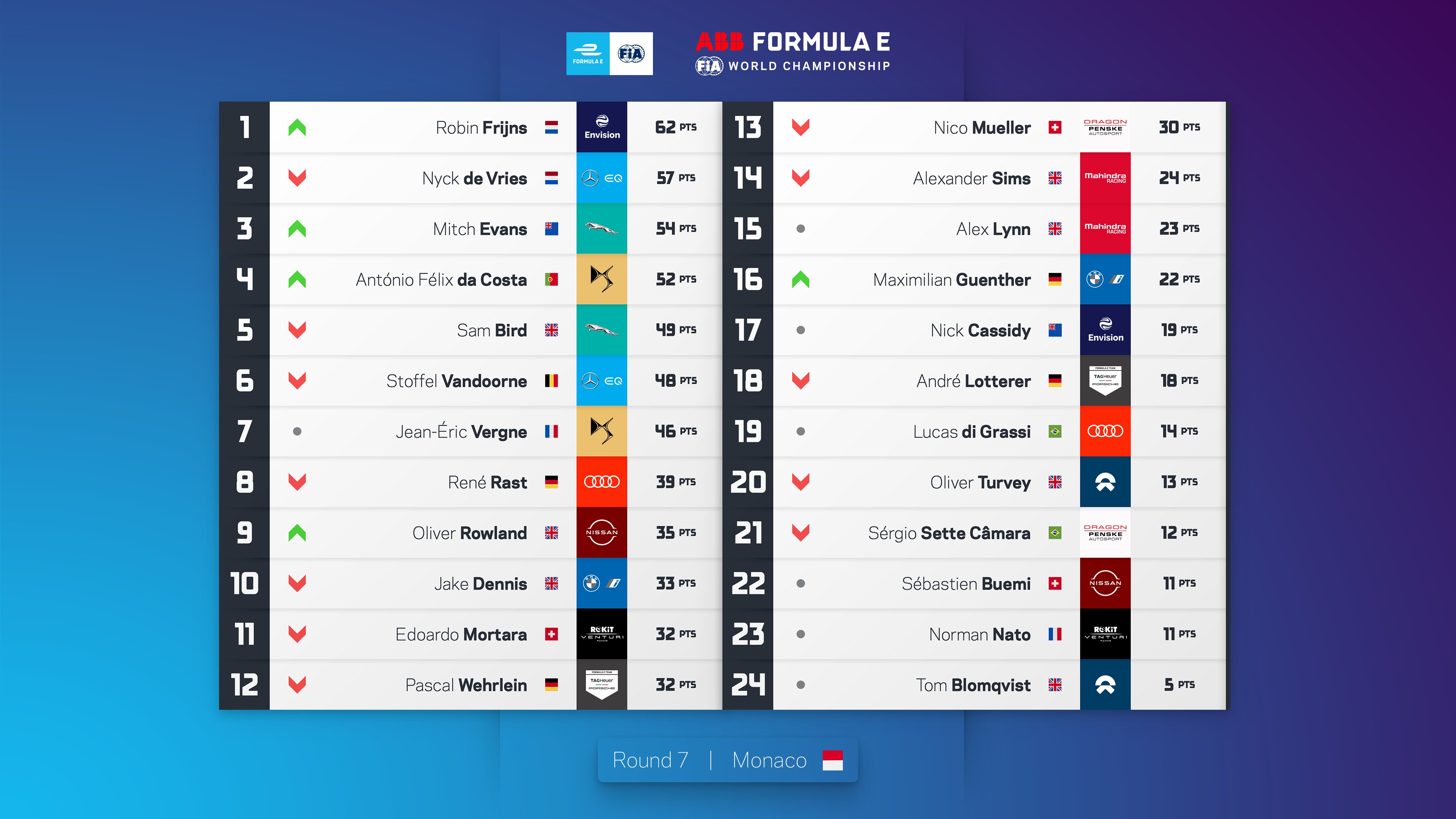 Final Thoughts from the Author:

This E-Prix was extremely chaotic with lots of ups and downs, but was so incredibly exciting to watch. My driver of the day would be Sam Bird as he started 16th and finished in the points at a track that is notorious for difficult overtaking. Robin Frijns had an excellent weekend as well finishing on the podium and extending his lead in the championship. I would love for Formula E to return to Monaco and continue to utilize the whole circuit because it is a great place to showcase the action of FE.

Now onwards and upwards to Mexico on the 19th and 20th of June, where the battle will continue for the championship.

I am Emily Cary, I am 18 years old, and I am from the United Kingdom. I have a strong passion for Formula 1. My favorite drivers are George Russell, Alex Albon, Charles Leclerc, and Max Verstappen. I am in my final year of Six Form before going to university to study PE with teacher training. I like to spend time with my friends, family and playing sports like dance and cricket. My passion for Formula 1 comes from the thrill and the excitement of watching the drivers drive and fight for their position on the track, also seeing the competitiveness and the drive that the drives have. Also, seeing the drivers doing the best they can to succeed and prove themself within the sport. This is the first article that I am writing about Formula 1, and hopefully, it will not be the last.